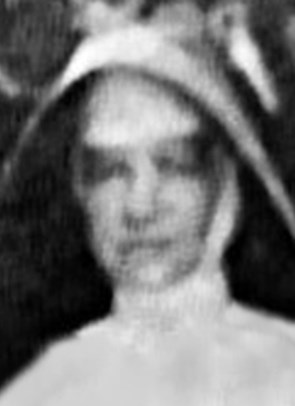 Sister Mary Monica was one of nine children of farmer, Patrick Tobin and Catherine Maher, named by Bishop Toohey 'among the saintly pioneers who did heroic work in the early Church in Australia and gave such wonderful example to their familie'.  Five of these children became nuns one, Sister Mary Ligouri, a Brigidine Sister and four Sisters of St Joseph of Lochinvar: Mary (Sr Celestine), Julia (Sr Benignus), Ellen (Sr Monica), and Catherine (Sr Anthony). At the time of her death the surviving members of the family were Mother Mary Anthony (Lochinvar), Mr Mick Tobin and Mr John Tobin.

Born in Largs on 18th October, 1883, and baptised Ellen, Sr Monica was blessed with a long life.  She entered the Sisters of St Joseph Lochinvar on the 19 March 1904, and was professed on 2 January 1907.  She taught in primary schools ministering in Taree, Abermain, Cessnock, Cundletown, Carrington and Lochinvar.

Sister M Monica was an exemplary and holy Religious, remembering and living the faith found in her parental home.

On the 2nd December, 1969 she died peacefully at St Joseph's Convent, Lochinvar as the Sisters recited the prayers for the dying. Requiem Mass, at which His Lordship, Most Rev Dr Toohey presided, was celebrated by Rev Fr Dilley on the afternoon of 3rd December. At this a large number of Sister's relatives assisted.

She is buried in the Sisters’ cemetery at Lochinvar