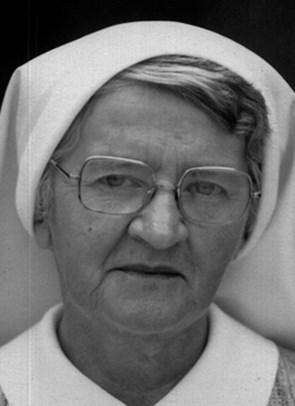 Iris Margaret Gertrude Gillespie, was born on 12th November, 1922 at Paterson. Her Parents, John Gillespie and Linda McMahon lived at Martins Creek. She was one of four children – John, Iris, Kelvin and Mark – and in her own words, they lived “in a humble, poor home but rich in many things."  She attended Hilldale and Vacy Public Schools and then St Joseph’s Lochinvar in 1937- 1939.

Iris entered the Sisters of St Joseph at Lochinvar on 24th June, 1939, taking the name of Sister Mary Sabina of St John the Baptist. She was professed on the 7th April, 1942.  After Profession Sr Sabina went to Wauchope on her ﬁrst Mission, and following that appointment worked in Merewether, Taree, Port Macquarie, Aberdeen, Cessnock and Shortland.  Her work in those communities was primarily in caring for the Sisters and Boarders with cooking, washing and ironing.

She worked as a Nurse’s Aide in the Lochinvar Nursing Home from 1963, caring for the residents there and she was assisted in this by Sister Mary Antonia. They were also Members of the Red Cross Phone In Program contacting elderly and lonely people daily.

In 1981 Sister moved from Lochinvar to Cessnock and carried out visitation in the Parish. Later she moved to Shortland where she became much-loved and respected among the parishioners. In the later years of her life she suffered much with ill-health and eventually had one leg removed. The Shortland Parish bought her an electric wheelchair to move around at Lochinvar. Sister was very patient in all her suffering.

On 20th September, 1994 Sister Mary Sabina died suddenly in the Nursing Home at Lochinvar. Requiem Mass was celebrated in the Convent Chapel and her burial took place at the Sisters’ portion of the Lochinvar Cemetery.