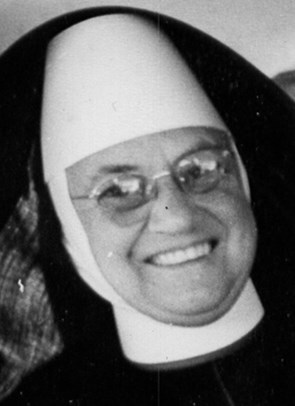 Melba Irene (‘Rene) Lane was born at Boolaroo on 24 April, 1904 to John Lane and Bridget Quinn. Her father was a shopkeeper at Lane & Quinn’s and also a hotel keeper at one time.

‘Rene went to Primary School in Cessnock till 4th class, then to Lochinvar until the end of her Intermediate year in 1920. For some time before entering at Lochinvar she assisted with the office work in her father's business in Newcastle.

On the 6 January, 1923 she entered the Novitiate at Lochinvar where Mother Mary Alphonsus and later Mother Mary Catherine were her Novice Mistresses.  As Sr M Stephane of the Divine Infant she was professed on 2 July, 1925 and during that time 1923-1925 assisted in Lochinvar Infants’ School, teaching in the old 1884 Convent.

From 1925 to 1942 Sister M Stephane was working in Secondary Schools at Lochinvar; from 1942 to 1946 she was appointed Principal at Merewether; from 1946 to 1952, Principal at Taree Secondary School and from 1953-1967, Principal at St Joseph’s College Lochinvar. She was one of a group of dedicated teachers who kept abreast of the changing times and directed her Staff in the intricacies of the new Wyndham Scheme in the 1960s. Sister M Stephane fulﬁlled the requirements of a competent educator in those days when success in public examinations assumed an importance out of all proportion to their worth.

When Sister completed her term as principal at Lochinvar in 1967, she went to Gateshead on the staff during 1968. In 1969 she was appointed to the Secondary School at Braddon in Canberra as French and English Mistress while living with the Goulburn Sisters of St Joseph at O'Connor.  In 1972 Sister was appointed to Taree where she worked in the Library until 1982 when she retired from the schools.  She then did Pastoral work in Taree from 1982 to 1986 and in Kurri from 1986 until 1989 when she retired to Lochinvar Nursing Home.

Sister Mary Stephane Lane died at Lochinvar on 28 November, 1992 and after the celebration of her Funeral Mass was buried in the Sisters’ section of the Lochinvar Cemetery.