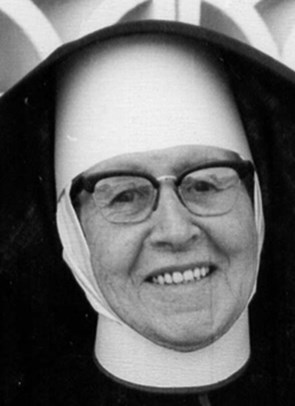 Anne Bernadine McGrane was born in Cessnock on 12 July, 1897, the second child of Bernard McGrane and Mary Love, a sister for their first born son, John Joseph and for the younger siblings who followed: Eugene, Leonard Francis Aloysius, Eileen Mary, Bernard and Sheila.  The McGrane family was well known in Cessnock. Bernard was an extensive landowner who was a pioneer in opening up the greater part of the Cessnock residential area as well as being one of the earliest licensees of the Cessnock Hotel.

Anne left home to join the Sisters of St Joseph in Lochinvar on 23 January 1916 and received the name Sr M Tarcisius of the Blessed Sacrament.  In the following year, her older brother, John Joseph was killed in the fields of France just two weeks short of his 22nd birthday.

After profession as a Sister of St Joseph on 3 July 1918, Sr Tarcisius spent the next almost eighty years serving in a great many places in the dioceses of Maitland- Newcastle and Lismore. In the early days many of her appointments were to remote country convents, accessible only by train or horse and buggy.  She delighted in teaching children and many places benefited from her dedication: Merewether, Dungog, West Wallsend, Port Macquarie, Kurri Kurri, Denman, Abermain, Aberdeen, Charlestown, Wingen, Krambach, Kendall, Shortland, Windale and Carrington.

During her later years Sr Tarcisius looked back with affection to so many of the places where she lived. She recalled that life in the convent was often very hard but she had many happy memories especially of Dungog where she lived on four separate occasions. In Dungog as in most other places, people were very kind, bringing the Sisters meat, milk, groceries and many little luxuries that were beyond the Sisters’ means in those days of “sixpence a week school money”. These links with the people lasted long and were typified by the visits people made to Sr Tarcisius during her years in the Nursing Home.

In 1971 Sr Tarcisius returned to Lochinvar where she spent her remaining years in the Nursing Home.  When she died on 15 December 1995 at the grand age of ninety-eight, she was, at that time, the most senior member of the Congregation. She was laid to rest in the Sisters' section of the Lochinvar cemetery.