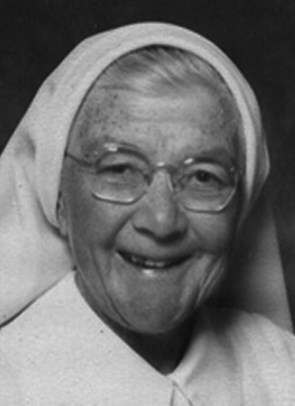 Joan Marie Coleman was born on 28 February, 1913, in Brisbane and was baptised at St Stephen's Cathedral. Her father, James Bernard Coleman was on active service in the Middle East with the A.I.F. in World War I. On his return to Newcastle, he worked at the B.H.P. as manager of one of the mills, but retired because of war injuries sustained at Gaza.

Her mother, Jessie was a self-made woman, orphaned at three, abandoned by her foster parents at fourteen, she worked in the Newcastle Hustlers store to help support the four children of the family. The three boys in the family were Vincent, who died very young, Bernard, who was killed in the war and Gerard.  It is interesting to note that Sister Thaddeus’ paternal grandmother, Mary Hogan lived in County Cashel on the farm next to the farm of Bishop Gleeson's people in Ireland.

Joan commenced school at The Junction and her Kindergarten teacher was Sister M Julian. Some of her schooling was with the Dominican Sisters at Mayfield and at Newcastle High School. Her parents were friends of Sister M. Anastasia's parents who came to their daughter’s Reception in 1930. Joan’s parents were so impressed with Lochinvar and what it had done for Sister Anastasia that they decided to send their daughter there to board and she did her Leaving Certificate at Lochinvar.

Eventually, she came to the Novitiate on 27 December 1935 and was given the name Sister Mary Thaddeus.  After her Profession on 29 June 1938 she embarked on her ministry of teaching.  In his letter of reference to Mother Mary Alphonsus who was the Sister Guardian at the time, Father JJ Coady wrote on 27 November 1935.

I have much pleasure in writing a credential for Miss Joan Coleman who, I understand is signing on with the Novitiate at Lochinvar. Joan is a splendid type of Catholic girl, stamped 18 carat on every link, and I'll daily pray that the Lord will give her perseverance at Lochinvar.

Sister Thaddeus had a bright, happy manner though she was somewhat self-effacing. Regular in her observance of the Rule, she lived the vow of poverty to the letter and never tolerated uncharitable talk.  She was selfless in her gentle and humble service to the sick.  During her life she served in a great many places: Cessnock, Wauchope, Cundletown, Wingham, Dungog, Belmont, Carrington, Kendall, Lochinvar, Bulahdelah, Windale, Morisset, Merriwa, Shortland, Gateshead and finally Krambach.  Sister Thaddeus was always volunteering her services, e.g. when in 1987 volunteers were asked for Merriwa, she was the one to accept the challenge. Again, in 1988 she volunteered for Carrington. Her devotion to the Blessed Sacrament and to Our Lady was outstanding.

Sister M Thaddeus died in the Manning District Hospital in Taree in 1991.  After the celebration of her Funeral Mass in the convent chapel at Lochinvar she was laid to rest in the Sisters’ section of the Lochinvar cemetery.

From the Words of Remembrance given by Sr M Regina rsj