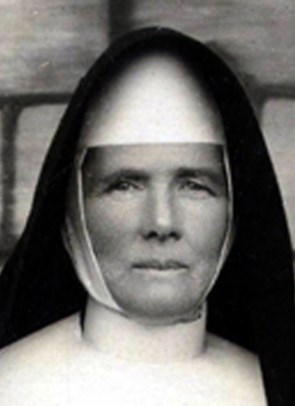 Brigid Doyle was born on 27 June 1867 in Ballin Ree in County Carlow, Ireland to Thomas Doyle and Hannah Sheridan. Brigid entered Lochinvar on 8 December 1893 at the age of thirty-six, took the name of Sr Mary Veronica of the Immaculate Conception and was professed on 7 January 1896. After profession it appears she spent all her years at Lochinvar except for short stays at Carrington and Knockfin.

“Many a blessing has been called down on her for her gracious Irish hospitality and kindly wit; and many a prayer will be said for her by all who knew her.  She welcomed so many who rang at the door during fifty years. Only for a very few years before her passing she was not able personally to see to the refreshment for the 'welcome' guest, who was immediately happy in her presence.” (Lochinvar Magazine)

In financial records held by the Congregation, rents with interest accruing were received by Sr Veronica from properties left to her by her parents from approximately 1932 to 1943. Assistance of this nature would have been of benefit to the Congregation in its early years.