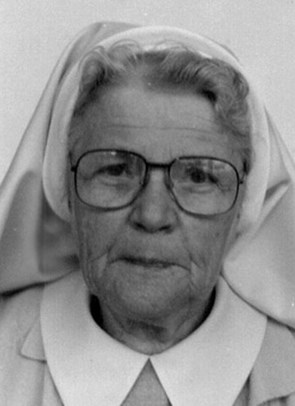 Ellen Teresa Byrne was born on 20 December 1905 in East Greta, the third child and second daughter of Philip Byrne and Margaret O’Brien. Her brother, Bertrand William was born in 1903 and her sister Veronica was born in 1904. Sadly, her mother died when she was five weeks old so she was cared for by her aunts and grand aunt until her father remarried when she was eight years of age and the family went to live in Weston. She went to school with the Dominican Sisters in Maitland and the Sisters of St Joseph in Abermain.

Leaving school at fourteen Ellen was apprenticed for three years to Mr Chisholm and Mr Wakeley who were tailors in Cessnock. She was an excellent seamstress, a skill which she put at the service of anyone in need, throughout her life.

On 6 January 1928 Ellen entered the Novitiate at Lochinvar, taking the name of Sister Mary Xaverius of the Holy Name.  She was professed on 2 July 1930. Her fifty eight years of religious life were spent doing dressmaking and domestic duties at Aberdeen, Lochinvar, Merewether, Swansea, Port Macquarie, Kurri Kurri, Cardiff and Windale.

A woman with a deep prayer life, Sister Mary Xaverius was a kind, thoughtful and gentle person. Her compassion was extended especially to young children. The little boys at the Boarding School in Aberdeen were very dear to her.

Sister returned to the Rest Home in Lochinvar in December, 1982. Towards the end of her life, sickness and physical suffering were accepted patiently and quietly. Her death came unexpectedly in the Mater Hospital in Waratah on 14 August 1986 when after surgery on her foot she suffered a heart attack.

Her Requiem was celebrated in the Convent Chapel on August 16 with Father Doran as the chief celebrant. She was laid to rest in the Sisters’ section of the Lochinvar cemetery.