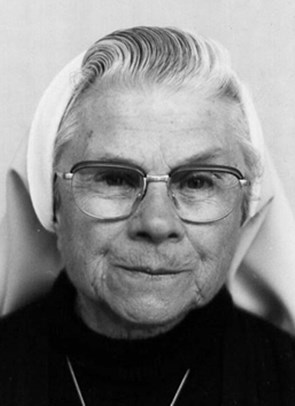 Madeline Margaret Perkins was born on 27 July, 1907 at Murrurundi in the Upper Hunter and lived at Blandford till becoming a boarder at St Joseph’s College in Lochinvar. Born to John Joseph Perkins, a grazier and Margaret Joanna Gooley she was a member of a large family. Her siblings were Nellie, Marion, William Jack, George, Greg, Monica and Terry.

Madeline went to the public school at Blandford until January 1917 until she went to Lochinvar. While at Lochinvar where she completed her secondary schooling and was also confirmed by Bishop Dwyer.  After gaining the Leaving Certiﬁcate she went to the Sydney Teachers’ College during 1926-27 and gained her Teachers’ Certificate. While teaching in State schools Madeline became ill and went on the relieving staff mostly around the Sydney area and in Newcastle.  She taught at various schools till the completion of her bond in 1930. While teaching at Adamstown Public School she resigned from the Education Department.

On the 27 June, 1930 Madeline Perkins became Sister Mary Chrysostom when she entered the Novitiate at Lochinvar. Unfortunately in December, 1930 she became ill with tuberculosis and the advice of the doctors was for her to return to Blandford.  In January 1932, Dr Gardiner consented to her rejoining the Novitiate even though she was still not very robust. On 2nd July, 1932 she became a novice and on 4 July, 1934 she was professed as a Sister of St Joseph.

Her first appointment was to Merriwa in 1935 and her second in 1936 to Gloucester where she was appointed Principal. From then to 1973 she served in many schools: Abermain, Gloucester, Dungog, Bellbird, Kurri Kurri, Taree, Charlestown, Wauchope, Summer Hill, Belmont, Merriwa and Lochinvar as Principal and upper primary teacher. In 1974 she was relieved of the responsibility of principalship and taught Fifth class at Windale, Clifton Gardens (1980-1981) and Belmont (1982- 1983). Despite her early health problems she taught for almost fifty years in the schools - a gentle and prayerful woman, loved by children and Staff.

When Sister eventually retired she became a resident of the Lochinvar Nursing Home till her death on 8 July, 1997.

Sister Madeline Perkins was buried in the Sisters’ section of the Lochinvar Cemetery after a Requiem Mass in the Convent Chapel.