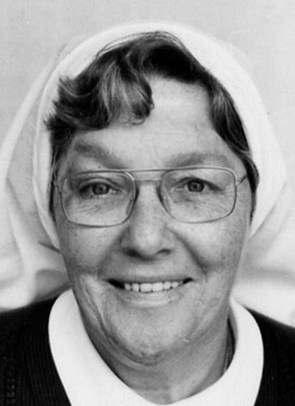 Alma Joan Fahey was born in Scottsdale, a town in the north-east of Tasmania, not far from Launceston on 3 September, 1925.  Alma’s father was William Fahey who became a High School teacher on his return from the First World War, married Dorothy Hutton in Wentworthville before making their home in Tasmania.  Alma was the eldest in the family, her siblings being Kath, Sheila and Kevin. Life changed dramatically for the family when their father died from pneumonia in 1933 causing her mother to move the family back to Wentworthville.

Like her siblings, Alma went to St Columba’s School, Wentworthville until Sixth class when her mother decided to send her to the Boarding School at Lochinvar in 1937.  On gaining her Leaving Certificate in 1942, Alma returned to Lochinvar the next year to enter the Novitiate on 19th March, 1943 where she was given the name Sister Marie Therese of St Joseph.  She was professed on 23rd January, 1946.

Sister Marie Therese thus began her ministry in secondary schools in the diocese. With her keen intellect she revelled in Latin and Ancient History and served as  teacher, Religious Studies Coordinator and School Principal for the next forty years at Lochinvar, Merewether, Taree and Gateshead.

After a long life of teaching,  Marie kept on using her creative gifts, devoting the next twenty years of her life to St Pius X High School at Adamstown as a Resource Person,  looking after Junior Vinnies, facilitating 'Seasons for Growth', being a Sunday night Lifeline Counsellor and acting on matters of injustice which provoked her.

At St Joseph’s Merewether and later at St Pius Marie set up a Quiet Room at lunchtime where there were reflective activities and gentle music. This attracted children who were hurting or lonely. Marie was there to welcome them.   Teachers, too saw Marie as someone they could confide in, someone who saw the best in everyone, who was kind to all, who was thoughtful in a quiet, personal way.

St Pius X High school honoured her in her lifetime by naming one of its houses the Fahey House, whose motto given for the students to emulate was 'Service'. As one teacher wrote, ‘As a religious sister, Marie was the genuine article. She lived her life without affectation. Integrity plus.’

In 2005 she was diagnosed with cancer and even so she took on Catechetics in State Schools.  She was lovingly cared for by her community until the last few weeks of her life.

Sister Marie Therese Fahey died surrounded by her loving Sisters at 5.40 pm on Thursday 6th December in the Mercy Hospice at Waratah and after the funeral Mass in St Joseph’s Chapel at Lochinvar was laid to rest with her Sisters in the cemetery there on 11th December 2007.