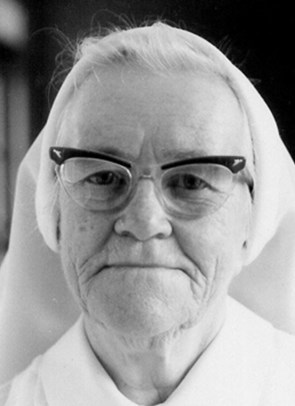 Maria Barbara Greer was born at Blandford in the Upper Hunter on 10 September 1903, the second eldest of the ten children born to William Greer and Mary Anne O'Brien who provided a wonderful family life, full of faith for their ten children.  Maria’s siblings were Kate, Gertie, Barbara, Barnie, Anne, William Eugene and Mick. Two brothers, Robert and Thomas died in their childhood.

Maria entered the Novitiate at Lochinvar on 23 January 1922 and was given the name of Sister Mary Baptist. In many ways she was a link with the beginnings of our Congregation because she knew our first Sr Baptist who came to Lochinvar as a pioneer Sister in 1883. She recalled that she was given the name, Baptist because Mother Aquin had asked the first Sr Baptist on her death bed, to pray that young Maria Greer would take her place in the congregation.

In her long life of sixty-two years as a professed Sister of St Joseph, Sr Baptist served in many parishes but she spent the majority of those years at Lochinvar. She also lived and ministered in Aberdeen, Cessnock, Cardiff, West Wallsend, Wauchope, Merewether, Morisset, Toronto and Windale. Generations of Sisters and students, parishioners and lay helpers, priests and visitors were touched by her kindness and hospitality, her genuineness, her warm humanness and her thoughtful response to others’ needs. She would go to any lengths to help you if she could and she was as generous and hardworking as the day was long.

Sister Mary Baptist had a great capacity to love and care for others and to communicate that love and care in very simple but tangible ways to her family, to her Sisters in the congregation and many others. She had a deep and beautiful faith which no doubt was nurtured in her family from her earliest years.

On 10 November 1986 when she died so quickly and quietly as the Sisters stood around her bed with Fr Doran in attendance, the words that came to mind were those of the Weston Priory hymn: ‘When the time of our particular sunset comes, our thing, our accomplishment, won't really matter a great deal, but the clarity and care with which we have loved others, will speak with vitality of the great Gift of Life we have been for each other."

After the celebration of her Funeral Mass, Sister Mary Baptist Greer was buried in the Sisters’ section of the Lochinvar cemetery.