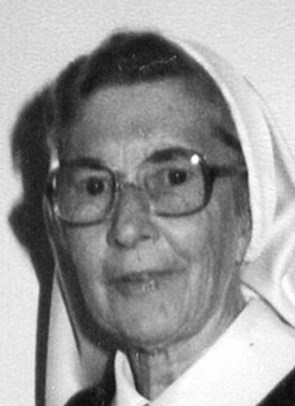 Sheelah Mary McLoughlin was born in Scone NSW on 28th October 1911, the fourth of eleven children of Martin McLoughlin and Martha Mychael: Rita, Paul, Sheelah, Marie, Archibald, Donald, Audrey, Marguerite, Shirley and Vaughan. She enjoyed a loving, close-knit family life at “Trelawney” at Moonan Flat, a conscientious little girl always trying to live up to her own and others’ expectations.

After educational and formative years of St Joseph’s Lochinvar Sheelah entered the Novitiate on 19th March, 1929 and as Sr M Helen of the True Cross was professed on 2nd January, 1932.

A gifted and much-loved teacher, Sr Helen was responsible for upper primary classes and school principalship in many parishes: Lochinvar, Bellbird, Krambach, Carrington, Cessnock, Aberdeen, Merewether, Merriwa, Shortland, Cundletown, Kurri Kurri, Summer Hill, Morisset and Muswellbrook.  She was often also Superior of the community or in charge of boarders.

After retiring from school in 1977 Sr Helen became involved in pastoral ministry in the parishes of Belmont, Tuncurry, Kurri Kurri and Krambach and spent some time at Anawim House of Prayer, Wangi as community support person.

Sr Helen, strong, loving, gracious and inspirational, was practical in her kindness, encouraging, enabling, ever on mission.  Even after an extended period of over-work, exhaustion and sickness followed by a period of hospitalisation and convalescence, Helen bore no grudges.

In 1994, her eyesight failing, Sr Helen retired to the Holy Family Wing, Lochinvar where she remained until needing Nursing Home care in 2006.  Despite her loss of sight in recent years she lost none of her joyful enthusiasm and to the very end maintained an amazing memory, clarity of thought and a keen interest in the lives of those she knew and loved.

A woman of extraordinary courage and fortitude, Helen was in total control as she prepared at the age of ninety-five for her exit from her beloved Lochinvar to a nursing home.

Sister Helen died very peacefully on Saturday 19th January in the Mercy Nursing Home at Singleton.  Her Funeral Mass took place in the Convent Chapel, Lochinvar on Wednesday 23rd January at 11.00 am.

From Words of Remembrance by Sr Ruth Long rsj