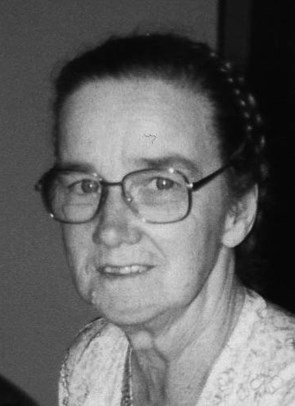 Mary Leah Jackson was born on 10 February 1927, the first-born child of Ronald Raymond Jackson and Mary Winifred Leehy in Barraba on the Northern Tablelands where her parents were graziers. Mary had four siblings: Ronald, Kevin, Bernard and Colleen. Mary’s family had links with the beginnings of the congregation both at Lochinvar when the Sisters arrived in 1883 and at Merriwa when the first branch house opened there in 1885.  Among the first pupils in Merriwa were Mary’s grandfather, Thomas Leehy, his sister Annie and their older sister Mary who was to become Mother M Aquin.

Leah, as she was known in the family, was educated as St Joseph’s College in Lochinvar as a boarding student and gained her Intermediate Certificate in 1942. She returned to Lochinvar in the July of the next year to enter the Novitiate, just a few weeks short of the sixteenth birthday. There she was given the name, Sister Mary Thomas of St Joseph.  She was professed as a Sister of St Joseph on 4 July 1945. During her Novitiate years, she completed her Secondary School education and in 1947 gained her Teacher’s Certificate.

Mary then set out on her years of apostolic service, firstly as a primary school teacher, to Taree in 1948 and subsequently to schools in Carrington, Krambach, The Junction, Merewether Beach where she was a member of the founding community, Port Macquarie, Aberdeen and Swansea, which was her last teaching appointment.

In 1975, Mary was recalled to Lochinvar to coordinate the catering for some two hundred boarders, a large community of Sisters and the residents of the Nursing Home.  Working closely with a dedicated staff, Mary did this ministry with great competence for close to twenty years.

Mary returned in 1993 to Merriwa, the land of her forebears where in semi-retirement she spent the next twenty years in generous service to the whole Merriwa community in a variety of ways. Mary assisted the staff and students of St Joseph’s school, visited the sick, elderly and lonely, helped out at local functions and events. She was involved in the Hospital Auxiliary, the Red Cross, Upper Hunter Neighbourhood Aid, the Ladies’ Craft Group and the Festival of the Fleeces. Her contribution was recognised when she was awarded the Rotary Club’s prestigious Paul Harris Fellow award for community service.  On Australia Day 2006 she was acclaimed Merriwa’s Citizen of the Year. Mary was a countrywoman at heart. She loved nature, the garden, animals and visiting the rural properties. She was a prayerful person of strong faith, devoted to the members of her large, extended family.

Mary’s years of active ministry came to a sudden end at the age of eighty-seven when she suffered a stroke in 2013, which necessitated her moving to Calvary Aged Care facility at Sandgate.  It was there that she died peacefully and quietly on 16 May 2018.  A large congregation of family, friends and parishioners of Merriwa gathered in the Convent Chapel for her Funeral Mass on 19 May. Father Paul O’Neill presided at the Mass and Father John Tobin, Parish priest of Merriwa and Father Gerard Mackie were concelebrants.  Following the Mass, Sister Mary Jackson was laid to rest in the Sisters’ section of the Lochinvar cemetery.