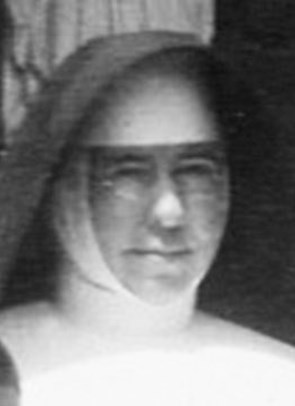 Mother Mary Aquin Leehy was one of the pioneers of congregation of the Sisters of St Joseph of Lochinvar.

Mary Leehy came from a solidly Catholic family. Her father, Thomas Leehy and her mother, Julia Kavanagh, were residing in Bundarra when Mary was born on 10 April, 1873. While she was still very young, the family moved to Merriwa where she continued her schooling at St Joseph's School which our Sisters opened in 1885.

As a young girl of seventeen, Mary Leehy left her family home and came in love, to dedicate her whole life and all her energy to God, joining the infant Community at Lochinvar on 15 May, 1890 just seven years after the foundation of the congregation in the Maitland diocese. She was given the name, Sister Mary Aquin of the Ascension. On 13 February 1893 in the old Convent Chapel in the presence of Bishop Dwyer of Maitland and the Sisters of her community, she ratified her dedication to Christ by taking her vows. She was the thirty-second Sister to take her Religions Vows as a Sister of St. Joseph of Lochinvar.

The subsequent history of Mother Mary Aquin's life was clear evidence that the Lord used her talents very well. Her administrative ability helped build up the Congregation of Sisters of St. Joseph. She spent all her time in Lochinvar apart from some years (sometimes as Superior) at Cessnock, Brookfield, Krambach, Dungog and Taree. From 1911 to her death she resided almost continuously at Lochinvar, occupying positions of the highest responsibility.

She was the first Mother-General of the congregation. There were times when circumstances called for more than just a natural ability of administration, when circumstances called for a superabundance of trust in Divine Providence. Never in moments of severest economic difficulty did Mother falter. She went to Saint Joseph. She used to say, 'Saint Joseph looked after the Holy Family. We are his family, too. He will look after us.' Saint Joseph never disappointed her.

During her life Mother Mary Aquin kept a keen and particular interest in the welfare of the members of her family circle. She kept in touch with them all and kept them all in touch with one another. She was a warm-hearted woman and her quiet peace inspired peace in those who came in contact with her.

Mother Mary Aquin died peacefully on 19 May 1960. The Solemn Office and Requiem took place at St. Joseph's Convent Chapel, Lochinvar, 21 May. Right Rev. Monsignor Peters, V.G., P.A., in the absence of His Lordship, Most Rev. J. Toohey D.D. presided and a choir of sixty priests assembled to chant the Office of the Dead and offer the Solemn Requiem Mass. The interment took place in the Lochinvar cemetery immediately after Mass, Right Rev. Monsignor Peters leading the cortege.

Excerpts were taken from the panegyric given by Rev. G. P. Flatley