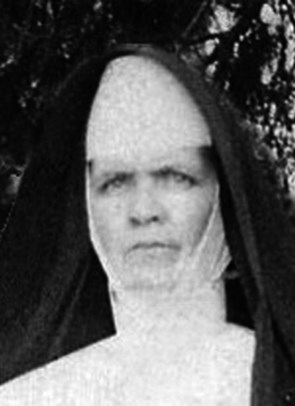 Mary Moy was born at Lochinvar on the 25 October 1876. Her father was Michael Moy, a school teacher and her mother was Annie Hickey. Mary entered the convent of the Sisters of St Joseph at Lochinvar on 4 October 1896 and received the name of Sister Mary Liguori of Our Lady of Perpetual Succour. After her profession on 5 July 1899 she ministered in Lochinvar, Wingen, Aberdeen, Burwood (now Merewether), Carrington, Cessnock, Dungog, Cundletown, West Wallsend, Denman, Port Macquarie, Abermain and Cessnock

“The death of Sister M. Liguori, an ex-student of Lochinvar, on 7 July, 1943 was a great shock to the whole Community. She had spent a full day in school at St Patrick’s School Cessnock and was her own bright self at evening recreation. As was her custom she remained after night prayers to make a special short visit to the Most Holy Sacrament. After retiring a sudden heart seizure ensued and the end came in a few minutes.

Hers was a bright, happy nature of great value in her community. She saw the good — and the humour—in everybody and everything and made the most of them for the general good. She is mourned by a host of friends in every district where her work lay. Her own sister, Sister Mary Ita survives her”. (From Lochinvar Magazine 1943)

Her remains were brought to Lochinvar and Office and Requiem were celebrated in the Convent Chapel on the morning of 9 July.  His Lordship Most Rev Dr Gleeson presided and twenty priests attended.

Sister Mary Liguori was buried after the Mass in the Sisters’ section of the Lochinvar Cemetery.