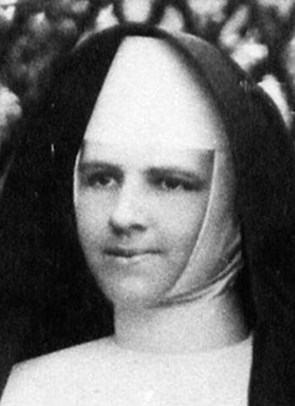 Florence Helena (Lena) Boland was born on August 6th, 1884, one of a large family born to John Boland and Mary Kauter. Their union was a noble blend of  the Irish and German settlers. The couple settled at Allandale in the Cessnock district and there, nurtured by lively faith, strong hope and fervent charity, brought up a family that was to be conspicuous in the service of the Church - all for the glory of God.

Lena responded to Our Lord's call of "Come, follow Me" and entered the Novitiate at Lochinvar on 25 March 1903, taking the name Sr Mary Patricia of the Mother of God. Having completed her Novitiate, she was professed and, then like the seventy-two disciples, was sent "to go therefore and teach."

This she did in Merriwa, West Wallsend, Burwood (Merewether), Kurri Kurri, Largs, Brookfield, Abermain and Swansea.  After retirement from teaching Sister Patricia lived in Swansea and Tuncurry.  Whether she was subject or superior, whatever she did, she did well.

In January 1964 Sister Patricia had gone to Moree with her niece Sr Ruth Boland to visit her aged brother whom she had not seen for many years.  While there she was suddenly seized with a stroke. The Sisters of Mercy of Moree, whose hospitality she enjoyed, were unremitting in their kindness and did everything in their power to assist her but medical aid was unavailing. On Monday 13 January 1964 Sister passed away as peacefully and calmly as she lived, after a few days of patient and edifying illness.

Floods and cyclonic conditions prevented Sister’s body being brought back to Lochinvar until the Friday morning, so the Solemn Mass and Requiem were celebrated on Wednesday morning in the presence of His Lordship, the Bishop of Maitland and thirty-six Diocesan Clergy. The remains were privately interred on the following Friday morning.

The Celebrant of the Mass was Rev. Father Crowe, C.Ss.R., with Rev. Fathers Wilkinson and Martin (newly ordained) as Deacon and Sub-Deacon respectively. Rev. Fathers Flatley and Driscoll were Cantors and Rev. Father McCosker was Master of Ceremonies. Rev. Father Maurice Boland, C.Ss.R., a nephew of the deceased, was unable to attend the obsequies as he was stationed in Malaya, but his mother and a large gathering of relatives and friends came for the Office and Requiem Mass and also the funeral in the Sisters’ Cemetery at Lochinvar.