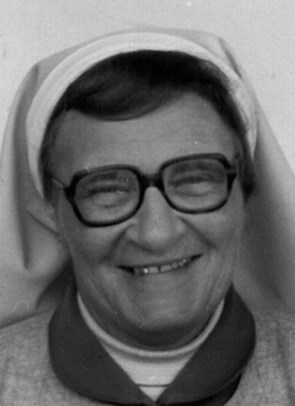 Joan Cecilia McMahon was born in Branxton on 9 October, 1922, the first of nine children of Laurence McMahon and Cecilia Teasey. She entered the Novitiate at Lochinvar on 8 December, 1940 at the age of eighteen, was given the name of Sister Mary Regina and was professed as a Sister of St Joseph on 6 July, 1943.  After her profession she began her ministry as a music teacher, first in Port Macquarie and then at Aberdeen, Lochinvar, Wingham, The Junction, Charlestown, Gateshead (St Paul’s), Windale, Krambach and Kurri Kurri.

Sister Regina was synonymous with music at Lochinvar. She continued the movement of musicians and music teachers who have become legendary in the Lochinvar story: Sisters Angela and Jerome, Dom Moreno, Sister Cecily to name a few. They were the halcyon days of the College Choir, College Orchestra, Missa Cantatas, Forty Hours devotion, weekly benediction, Religious receptions and Professions and great end-of-year Lochinvar concerts. In those years, Sister Regina, with her many musical gifts, her perfect pitch, sensitive accompaniments and great patience was the person responsible. The highest quality was achieved in every musical endeavour she made and it was done quietly, no undue pressure, rather gentle encouragement and affirmation of the musicians.

Extrovert by nature, Sister Regina loved people. While gentle and gracious she was also a strong woman who would stand up and be counted on issues she believed in.

In the last ten years of her life Sister Regina moved into retirement from active ministry and began to experience ill health.  With her customary steadiness and unwavering confidence in her God, she faced each challenge front-on.  In Kurri Kurri in the early 1990s she taught catechetics to children in the local State primary school, enjoying the children as they enjoyed her and walking to the school for the exercise. Wherever she was and whenever she could, she contributed to music in the Church and played for all kinds of occasions. Later, after her stroke, through sheer determination, she worked her way back to walking with the aid of a walker and to playing the organ again in the Chapel.

With her health deteriorating Sister Regina had surgery for cancer in August 2000. Her life came to its close on Saturday, 4 November, 2000 at Lochinvar, in the presence of many of her Sisters. After her Funeral Mass, Sister Regina McMahon was laid to rest in the Sisters’ section of the Lochinvar cemetery.