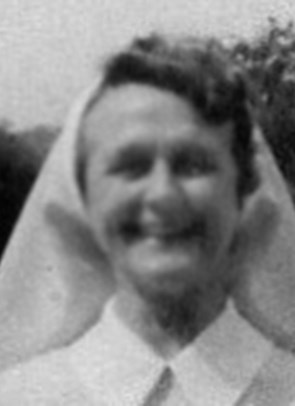 Maryellen Banister was born at Brookfield on the 13th February, 1914, the seventh child of farmer, Vincent Banister and Mary Burdekin.  Her sisters and brothers, Mary, Martha, Reginald, Veronica, James and Cyril pre-deceased her, leaving Kathleen the last living member of the family at the time of her death.

Maryellen entered St Joseph's Novitiate on the 2nd July, 1933, in Lochinvar's Golden Jubilee Year. She was given the name and title Sister Mary Oliver of the Visitation. After Profession on 7 January 1936, her ministry to God's people took her to Wauchope, Carrington, Gloucester, Port Macquarie, Taree, Largs, Shortland, Aberdeen, Kurri Kurri, Cessnock (at Mt St Joseph and St Patrick's), Cardiff, Merriwa, Clifton Gardens and Charlestown.  She took a great interest in her teaching and had a talent for imparting knowledge and drawing forth hidden talents in others.

During her teaching years Maryellen had the added responsibility of being Boarder Mistress at Aberdeen and Port Macquarie.  She told many a story about those times: taking the boarders for walks on Sunday afternoons, darning socks, preparing for competitive sport carnivals, dealing with mumps, chicken pox, measles in due season, packing of ports, collecting railway tickets and racing for trains.

She had a great devotion to the Blessed Sacrament, a special love for our Blessed Mother, her rosary and the Angelus, and a strong devotion to St Joseph. She ministered as spiritual director to the St Vincent de Paul Conference and belonged to the Red Cross Association. Maryellen loved nature, her green fingers succeeded in producing many choice blooms to decorate the convent chapel.

Over the years Maryellen was blessed with good health, however she suffered a stroke and after another more severe stroke became a resident in a few local Nursing Homes before a vacancy occurred in the Lochinvar Nursing Home in 1996.

Maryellen died peacefully at Lochinvar on 4 September, surrounded by her Sisters and blessed in her last moments with an inner peace and calm. She was buried in the Sisters' section of the Lochinvar cemetery.

Based on Words of Remembrance delivered at her funeral