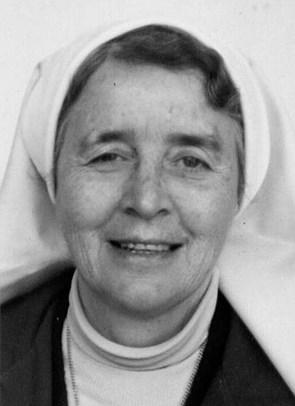 As a young woman she became passionately involved in causes into which her big heart, rigorous mind and poetic spirit lead her at Sydney University with the Grail ladies, and revealed very young a mystical core that many would later experience but not always understand.

After completing her studies at Sydney University Maureen entered the novitiate at Lochinvar in 1944 and as Sister M Teresa Joseph, was professed on 2 July 1947.   She spent her years of active ministry teaching in Secondary Schools especially at Lochinvar, St Joseph’s Merewether and St Mary’s Gateshead.  Fondly remembered by former pupils for her particular openness, humanness and humour,  she was a vivacious teacher who was always interested in the well-being of her students.  As one former pupil put it, “she was good, compassionate and unrelentingly committed to being holy. To some she was an exciting, even impish person”.

In I980 Maureen moved to Sydney to work with the Servants of Mary, during which time she wrote and published several books on devotion to Our Lady

In 1991 she retired to live at Swansea, then Port Macquarie, in I997 became a resident of the Holy Family Wing at Lochinvar and in 2003 of St Joseph ’s Home, Sandgate.  A gracious and grateful person she suffered a great deal from ill health in the last years of her life.

Sr Maureen died suddenly but peacefully at St Joseph’s Home Sandgate about 12.30 pm on Wednesday 25 October 2006.   She had celebrated her 85th birthday two days before her death and was in the 59th year of her religious profession.

Her funeral Mass was celebrated at Lochinvar on Monday 30 October and she was buried in the Sisters’ cemetery at Lochinvar.

Taken from Words of Remembrance by Sr Carmel Moore