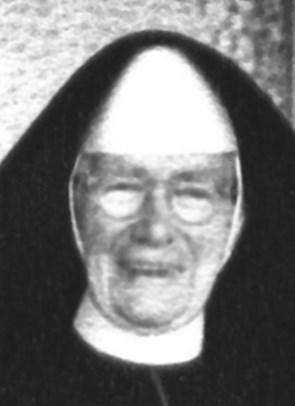 Born at Mountain Station in Merriwa, Margaret was the daughter of squatter, Donald McRae and Margaret Chisholm. She was brought up in a pious home and came to the Novitiate at Lochinvar on 23 January 1910.  She was given the name of Sister Mary Ninian of Our Lady of Perpetual Succour.  She was professed on 2 July 1912.

Her Sisters in numerous convents throughout the diocese shared her cheery example. Placing herself under the guidance of the Holy Spirit, she accomplished what she set out to do as she served God well as a devoted Sister of St Joseph.

Sister Mary Ninian cooperated with those engaged in the schools by ministering to their needs so that their Apostolate might go on. The Eucharistic "Bread of Life" sustained her through the years until, with her community, she prepared for death and prayed God would welcome her into the eternal Kingdom.

Sister Mary Ninian died peacefully at Lochinvar on 30 May, 1970 aged eighty-seven in the presence of her Sisters and in the fifty-eighth year of her Religious Profession. His Lordship Bishop Toohey presided at the Requiem Mass which was celebrated by Father R. Smythe.

Excerpts taken from the panegyric preached by Father R Smythe