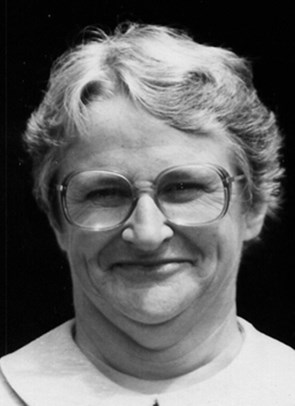 Patricia Vera Hayes was born in Taree on 30 August, 1928, the fourth child of Henry Thomas Hayes of Narrabri and Helen Green of Rocks Crossing, Knorrit Flat in the upper region of the Manning Valley.  They had married on the Feast of the Presentation, 2 February 1915 and made their home in Taree.

In the Hayes family, Mabel, Henry and Helen preceded Patricia and William followed. They were a well known family in Catholic circles in Taree. Henry was renowned for his care of all matters relating to the Rosary Church and spent so much time there that Patricia was known to have said that he owned the Taree Church, where she was baptized, made her first Communion and was confirmed.

Entering the Novitiate at Lochinvar on the 8 June, 1945, Patricia took the name of Sr Mary Hilda of Our Lady of the Rosary and was professed on the 6 January, 1948. During this time she completed the Leaving Certificate, Teacher Training and Speech training and gained a Merit from Trinity College of Music, London.

As Sister M Hilda, she began teaching Primary classes at St Joseph's Primary Denman and then moved to variety of schools throughout the Dioceses of Maitland and Sydney. She was a foundation member of Holy Family Primary at Merewether Beach (1956) and the Holy Name Primary Forster/Tuncurry (1959) and at St. Joseph's Primary Morisset (1962). She is remembered as a happy and resourceful teacher who encouraged learning in the children. In 1983, Sr Patricia took time to up-date her teaching skills at Signadou College in Canberra.

An unfortunate motor accident in 1978 left Sr Patricia with a legacy of severe back pain that curtailed her activity in many ways during her later years. However, she was able to call on her early commercial training when she went to work in the Congregational Office at Lochinvar where she served for many years.

In 2003 Sr Patricia retired to the Tenison Apartments at Swansea and in 2012 she was the first resident to move into the Southern Cross Apartments at Caves Beach. She was happy there and proceeded to construct her daily life to suit her age and declining health.

Sr Patricia began to experience discomfort and pain in swallowing and was diagnosed with oesophageal cancer. She moved into care at St Joseph’s Home at Sandgate on Tuesday, 19 November 2013 and died there early on the morning of Thursday, 21 November 2013, the Feast of the Presentation of Mary.  After her Funeral Mass in the convent chapel she was laid to rest in the Sisters’ section of the Lochinvar cemetery.