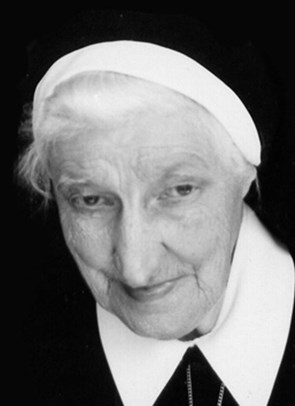 Willamena Kidd was born in Dundee on 15 August 1900 and was baptised Willamena after her father. She was the third child born to William Kidd and Susannah Farnham in a family of eight girls and one boy, her younger brother Bill.

When Willamena was ten years old the Kidd family moved to the Delungra area near Tamworth. Her schooling was often interrupted as the six-mile walk to school was too dangerous because of the men shooting kangaroos and unfriendly aborigines. Faith education opportunities were rare in the country, but her faith was learnt in the family at her mother’s side. Because of the distances involved, Willamena only went to Mass twice before she was thirteen.

Willamena came down to Maitland to live with her grandmother when she was fourteen so that she could be prepared by the Dominican Sisters to receive her First Holy Communion. She developed a great love for the Mass, often running from Bolwarra into Maitland for the 7.30 Mass, running home for breakfast before running again to Maitland for school.

Willamena tried for ten years to come to Lochinvar as in 1915 times were hard and money was short because of drought and the war years.  However after two years at Tech where she did dressmaking and tailoring, Willamena entered the Novitiate at Lochinvar on 8 January I924 and took the name of Sister Mary Winifred of the Sacred Heart.

During her religious life, Sister Winifred spent most of her time in places where there were boarding schools and she ministered to the children and those who looked after them. She was greatly loved in Wauchope where she spent twenty-two years. She was an excellent cook and prepared tasty meals in those times when good housekeepers had to “make something out of nothing!”  When the Boarding School closed in Wauchope, Sister Winifred was invited to teach the Infants, which she did with much love and mothering.

In I978 Sister Winifred came home to Lochinvar to retire, spending her last ten years in the Nursing Home. She relished the opportunity for daily Communion. The challenge of her life came from something she read, liked a lot and learned by heart: “To hide in his wounds, to dwell in his heart, to learn his ways.”

Sister Winifred died on 7 June 1995 in her ninety-fifth year and was buried in the Sisters’ section of the Lochinvar cemetery.